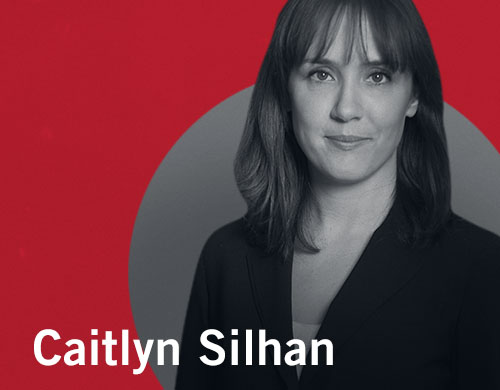 Here’s what Caitlyn had to say during our Women’s History Month Women In Law Roundtable Q&A.

Waters Kraus & Paul: According to the American Bar Association, there are approximately 1.4 million licensed attorneys in the United States. While there may be obvious overlap in experiences and reasons for choosing to become a lawyer, no two people are the same. What, or who is it that inspired you to pursue a career in law?

Caitlyn Silhan: I was lucky enough to be directed towards a legal career early on by my teachers in high school. They thought that my writing and my classroom discussion appealed well to a legal career. I remember one of my high school English teachers had several siblings, two of whom are prominent in their fields. One is a journalist on a national news network and the other is a prominent attorney, and he said that I reminded him of both and also mentioned that it would be great if I had interest in the law. Especially because he knew that women were underrepresented – are underrepresented in the legal profession…although that’s changing now, most graduates from law school are women. I got a lot of guidance from teachers in particular who believed that my abilities and personality type would fit well with a legal career.

WKP: Amid the COVID-19 pandemic, many routine legal proceedings like working from the office and court attendance have been suspended or amended. How have these changes impacted your own career? As a professional, what are the biggest challenges faced when working from home?

CS: Both my partner and I are attorneys, and we have a toddler. So, when COVID hit we did what we thought was fair and split time, we would take turns. One of us would focus on our daughter, while the other one was able to go into a room and shut the door and concentrate. And we just switched off. It’s not ideal. But it’s what worked early on. And then we were able to bring our nanny back over the summer, and she’s been able to come most days since then. If we need to go into the office to do work there, it’s manageable, otherwise, there’s assigned space in the house to work. It’s been challenging, but fortunately, I have a partner who while also working full-time as an attorney, is committed to doing 50% of the work, whether it’s childcare or other household tasks.

WKP: Where do you think we are in terms of gender equality in the legal profession? How would you personally encourage young women thinking about becoming attorneys but are worried about the challenges that lie ahead?

CS: Law school has certainly changed for the better in terms of gender balance. The current trends or just number of people who identify as women going to law school and graduating is really encouraging in and of itself. That being said, the actual legal profession seems to lag behind in terms of gender, ethnicity, and economic background. Even though women make up more than half of people graduating from law school, they’re still not represented that way in firms, which is why they tend to drop out of the profession at higher rates than men. They are not as equally represented within law firms or within the government. Overall, I think it’s encouraging to see the trends moving in the right direction in law schools, and I’m optimistic that they will move in that same direction in the legal profession, but it will take time. It takes everyone focusing on changing the gender disparity between men and women. That includes people joining the profession, and the stakeholders in it for decades.”

WKP: What do you think needs to change in our society, or possibly even in our world, for women to be given their fair share in their legal professions and every other profession?

CS: It comes down to the stakeholders. They need to start putting their money where their mouth is when it comes to gender, ethnicity, or any kind of diversity. It’s not enough to just say that women should have more or should be better represented in the legal profession. If I minority were to be represented, it takes intentional action on the part of people who can make that happen. In large part, that means giving women a seat at the table, where they are making significant decisions about their places of work — decisions about hiring and promoting, etc.

For the stakeholders who are already at the table [men], it’s not enough for them to just say they would like more women employed at their firm or at their government agency. It’s not up to women alone to keep fighting the fight. They need partners in positions of power.

WKP: Will this change anytime soon?

CS: I can’t speak for the entire legal profession. In my 10-year career as a lawyer, I’ve seen it go in ebbs and flows, especially looking at judicial appointments and nominations. But it’s getting there, and eventually, it’ll go the whole way. There’s more and more recognition that it’s not enough to just say that we would like to live in a world where women are in more prominent positions or are just represented overall as practicing attorneys or sitting judges. There’s recognition that it takes deliberate effort to make it happen. And I guess that’s the first step to have change come into fruition.

Check out our Waters Kraus Paul Virtual Roundtable Q&A: Women In Law for more interviews with our attorneys.