Whistleblowers Motivated By More Than Money 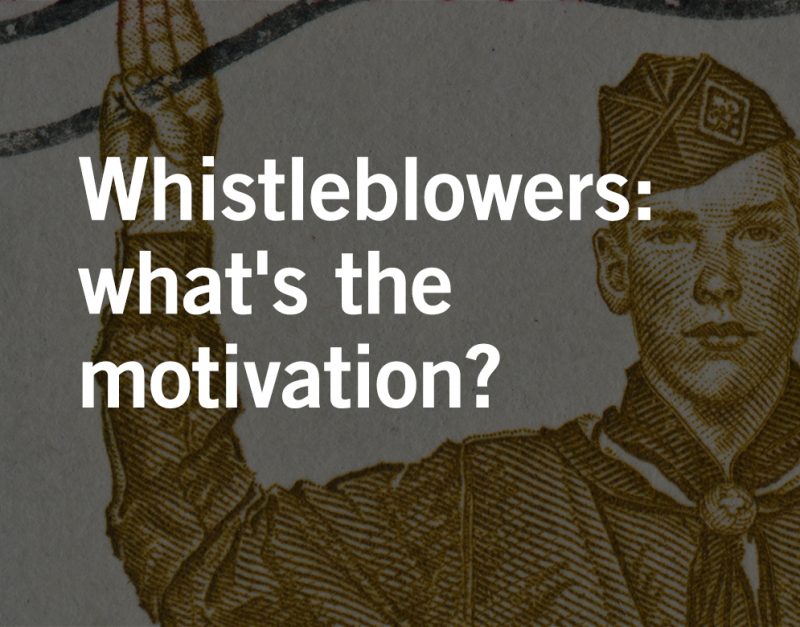 Sure, the payouts can be huge, but many who shine the light on fraud do so out of principles.

While qui tam whistleblower lawsuits may result in multi-million dollar earnings for the whistleblower, many of these people exposing fraud or illegal activity in a company do it for more important reasons. A strong sense of justice and fairness motivates them — according to recent research — more than the possibility of a large reward and loyalty to the employer.

According to Adam Swartz, a psychologist at Northwestern University’s Kellogg School of Management, “a lot of whistleblowers tend to be folks who feel they have some kind of higher calling. Some have a real sense of patriotism, some have a sense of even religiosity. They are people who feel some higher loyalty than the parochial loyalty they feel to the organization they belong to.”

How money can backfire

A 2010 New England Journal of Medicine study of whistleblowers in the pharmaceutical industry found that financial gain was not what convinced people to expose alleged wrongdoings. On the contrary, integrity, altruism, public safety, justice, and self-preservation are consistent motivators.

In the face of significant legal, ethical, financial, and personal challenges, most whistleblowers decide to report potential fraud or misconduct because they are confronted with profound wrongdoing. It is no secret that whistleblowers often face a great deal of backlash.

James Dungan, a postdoctoral researcher at the University of Chicago’s Booth School of Business states that “it’s possible that adding extremely large incentives for blowing the whistle may backfire by simultaneously increasing the backlash that whistleblowers often receive from their peers.” Dungan goes on to say that people may believe that whistleblowers may not care about the company at all and that they are only in it for the money.

Whistleblowers and the Law

A whistleblower is a person who exposes any information or activity that is allegedly illegal within a public or a private company. It is vital that potential whistleblowers have an understanding of the objectives and potential consequences of their actions.

The False Claims Act (FCA) was passed by Congress in 1863 and is used to combat fraud against the federal government. The FCA law includes a “qui tam” provision that allows private citizens the right to file suits against the perpetrators on behalf of the government. If the whistleblower files a case under the FCA law and if the government can obtain a recovery, then the whistleblower can earn between 15 percent to 30 percent of the recovery.

Waters Kraus & Paul is a national plaintiffs’ firm with lawyers litigating complex civil matters as well as practicing qui tam whistleblower litigation and False Claims Act litigation nationwide. Based in Dallas, Texas, the firm has offices in Los Angeles, California and by appointment in Illinois. Our qui tam attorneys represent whistleblowers exposing fraud and false claims against the government in a variety of matters including government contractor fraud and procurement fraud, healthcare fraud, assisted living fraud, SEC fraud, and Foreign Corrupt Practices Act (FCPA) violations. Contact us at 800.226.9880 to learn more about our practice and our qui tam attorneys. All calls are kept confidential.