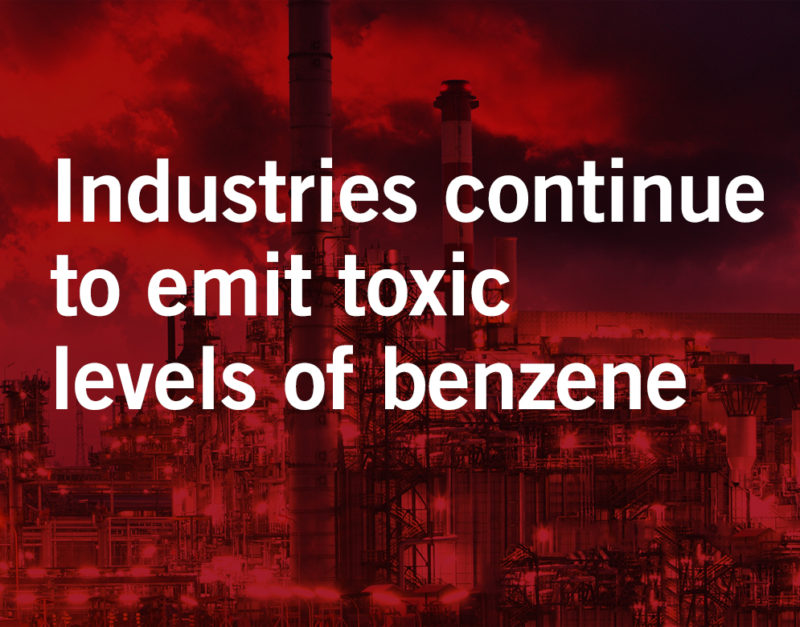 Researcher’s findings in a 2017 study confirmed a long-tested and proven fact – benzene has toxic effects on blood and bone marrow. The research suggests that benzene exposure could be toxic to workers even at levels below the U.S. occupational standard of 1 part per million (ppm). This discovery leaves those who operate at the nationally recommended limit at risk of developing benzene-related blood cancers such as acute myeloid leukemia (AML) or myelodysplastic syndrome (MDS).

Despite the evidence that supports this study and others like it, many, if not most, of the industries that use and produce benzene do so above the federally accepted limits. The exposure to benzene in such concentrations can trigger disease not only work in people who in those industries but those who live near their operations as well.

According to recent government data reported on by Reuters, ten U.S. oil refineries, including six in Texas, released benzene in amounts that exceed the national standard just last year. Although in 2018 the U.S. Environmental Protection Agency (EPA) implemented a rule requiring continuous monitoring of air pollutants around plants, it overlooked efforts to install pollution controls and apply safer workplace practices to decrease the risks of long-term benzene exposure.

In an emailed statement, a representative of the EPA insists that benzene concentration levels monitored at refineries “do not reflect benzene levels in the community,” however, they gave no proof as to how that is the case. Even though monitoring for benzene is meant to be a tool for early detection of potential problems, the EPA’s data is not intended to measure the exposure of communities near plants or refineries, many of which are disproportionately poor, black or Hispanic.

Oil refineries and the petroleum industry are not the only benzene emitting settings. The human carcinogen is widely used in the manufacture of many substances and products, including shoes, plastics, rubbers, lubricants, dyes, detergents, pesticides, and even cigarettes and other tobacco-containing products.

Exposure to benzene occurs mostly through inhalation, and it can either happen chronically through lower concentration levels or suddenly and acutely. The latter case can cause anything from drowsiness to instantaneous death. Meanwhile, exposure over a long period of time can often lead to the development of blood-related conditions such as AML and MDS.

Both illnesses have symptoms that can be rather similar to other diseases such as:

However, several diagnostic tests administered by a doctor can confirm the presence of either AML or MDS. While treatment options are available, the type of disease, its progression, and one’s age or overall health play a determining role.

Seek justice with the help of our experienced benzene attorneys. Our Dallas, Texas, benzene law firm has battled corporate giants on behalf of individuals like you for 20 years, aggressively fighting to hold them responsible for dangerous chemicals and the personal injuries and cancers they cause. If you have suffered a catastrophic injury caused by dangerous products, we can help.