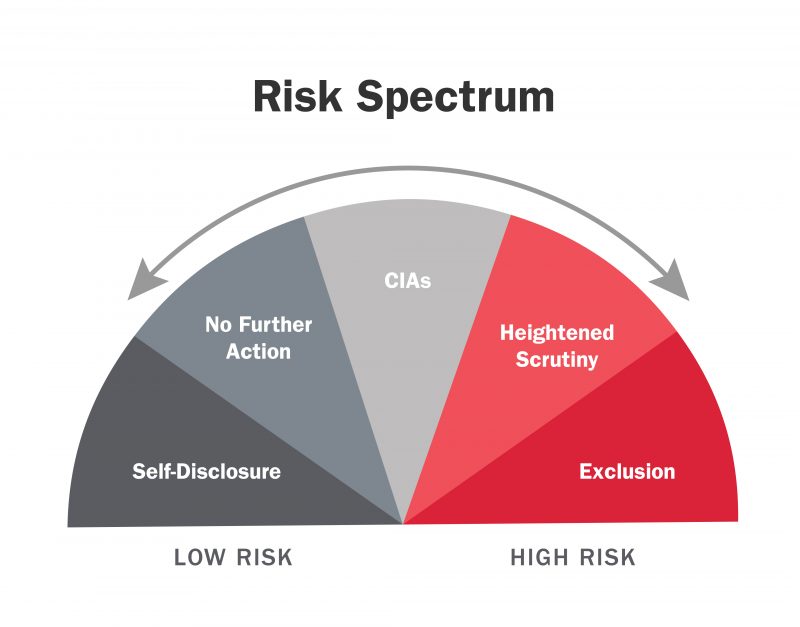 The companies refused to sign Corporate Integrity Agreements with the U.S. Department of Health and Human Services.

Allegations of fraud, settlements, and refusals to sign a Corporate Integrity Agreement led the U.S. Department of Health and Human Services’ Office of Inspector General (OIG) to give two dental healthcare companies a high-risk classification.

ImmediaDent of Indiana, LLC and Samson Dental Partners, LLC were the first companies to be rated according to the new Fraud Risk Indicator, launched by the OIG in October 2018. The program focuses on healthcare providers that have been charged under the False Claims Act and that have also been deemed by the agency to be at risk of committing fraud.

Both companies settled the dental Medicaid fraud allegations for $5.139 million in October 2018. The whistleblower, represented by Waters & Kraus, LLP’s qui tam attorneys, brought the case under the qui tam provisions of the False Claims Act.

Due to their fraud risk classification, the two companies will still be placed under heightened scrutiny even though they admitted no wrongdoing. The OIG initially offered a Corporate Integrity Agreement, but both dental service providers refused the agreement, triggering the high-risk label.

How Does the Fraud Risk Indicator Work?

The OIG evaluates health care fraud cases on a continuum from highest to lowest risk of fraud and abuse. Once the OIG determines a healthcare provider’s risk rank, the provider or entity is publicly listed on the continuum. The criteria for each level on the fraud risk spectrum, initially proposed on the 2016 report titled Criteria for implementing section 1128(b)(7) exclusion authority, can be found on the OIG website. The Fraud Risk Indicator includes the following levels:

Because these fraud risk rankings may be relevant to multiple stakeholders, the OIG makes the healthcare provider rankings publicly available. Not only does this allow for increased transparency, but it also encourages accountability. Patients and other healthcare professionals can make educated and informed decisions. In turn, the integrity of the industry is protected as the trust between providers and patients increases.

Whistleblowers, also known as relators, bring matters involving Medicare and Medicaid fraud under the qui tam provisions of the federal False Claims Act. Attorneys file a qui tam action on behalf of the Medicaid whistleblower. The U.S. False Claims Act allows private citizens to file lawsuits on the government’s behalf when someone defrauds the government through any federally funded contract or program. The private citizen is then able to recover a whistleblower relator reward if the court finds that fraud has been committed. If the government intervenes in the case, the Whistleblower can receive 15 percent to 25 percent of the amount recovered from the defendant. If not, the whistleblower may continue the case on her own and may be eligible for 25 percent to 30 percent of the recovery.

Waters Kraus & Paul is a national plaintiffs’ firm with lawyers litigating complex civil matters as well as practicing False Claims Act litigation and representing qui tam whistleblowers nationwide. Based in Dallas, Texas, the firm has offices in Los Angeles, California, Baton Rouge, Louisiana, and by appointment in Moline, Illinois. Our attorneys represent whistleblowers exposing fraud and false claims against the government in a variety of matters including government contractor fraud and procurement fraud, health care fraud, assisted living fraud, SEC fraud, and Foreign Corrupt Practices Act (FCPA) violations. Contact us online or at 800.226.9880 to learn more about our practice and our qui tam attorneys. Inquiries are treated discreetly and kept confidential.