‘Roundup Ready’ Crops Immune from Powerful Herbicide, but What About Us? 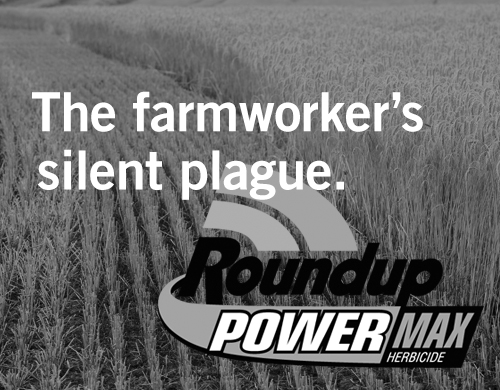 Ever seen what Monsanto’s Roundup does to weeds and other organic matter?

The smart folks at Monsanto have created a cash cow in Roundup, its powerful herbicide containing a widely used and controversial chemical known as glyphosate. Monsanto found a way to genetically modify its branded and trademarked seeds so that crops are resistant to glyphosate, allowing commercial agriculture operations to indiscriminately spray glyphosate on crops without affecting their harvest.

Monsanto’s genetically modified crops may be safe from glyphosate, but what about us? What about the people working in the fields? Are we Roundup Ready? Science and government regulators are only just now looking into that. In the meantime, U.S. consumers are ingesting foods that contain measurable amounts of glyphosate every single day, and even the most conscientious shoppers are powerless to educate themselves about which foods contain this poisonous residue.

The most popular herbicide in the world, glyphosate has been deemed a likely carcinogen by the World Health Organization’s International Agency for Research on Cancer. Animal studies in the U.S. have linked it to birth defects and reproductive problems, while other studies have found that glyphosate harms cell DNA in human embryos, the placenta and the umbilical cord.

Glyphosate has Grown in Popularity Since its Introduction in 1974

For example, farmers routinely spray glyphosate on wheat during the drying process, which allows the grain to be harvested sooner than otherwise possible. The practice is now so common that it’s hard to find wheat and oats that have not been treated with the weed killer. Corporate growers are regular users of the herbicide and have the power to protect their farm workers and the public, but safeguards are rarely put in place.

Even though Monsanto claims Roundup is safe and biodegradable, the U.S. Wheat Quality Council has found traces of glyphosate in all samples tested in the U.S. and Canada.  But it’s not just wheat contamination that has many worried. Testing by the FDA in July 2016 found up to 1.67 parts per million in certain oatmeal cereals from 10 unnamed brands. Testing of honey samples from 19 suppliers revealed glyphosate in nine samples with contamination as high as 121 nanograms per million.

While these amounts may be below the U.S. Environmental Protection Agency’s maximum tolerance levels for glyphosate in oats, there is no such tolerance level for residues in honey. The FDA started testing certain other foods for glyphosate residue in February. These late efforts to come to terms with glyphosate contamination of our foods raise serious questions. What is clear is that consumers deserve the right to be able to choose to purchase and consume foods containing this dangerous herbicide.