Roundup®, the most widely used weed killer worldwide, has links to cancer. Pesticide makers, like Monsanto, have a responsibility to warn the public of the risks involved with its use. As a leader in pesticide litigation, we have the in-depth experience and steadfast commitment to see every claim through until justice is done. Find out why Waters Kraus & Paul is the right firm for you.

Monsanto’s Roundup weed killer is a type of herbicide used to get rid of unwanted plant life. It is a form of pesticide. The Environmental Protection Agency (EPA) defines pesticides as any substance intended to prevent or destroy any pest, including bugs, vermin, and vegetation.

Studies have linked glyphosate, the main ingredient in Roundup, to an increased risk of life-threatening illnesses and cancer. Diseases associated with exposure to the pesticide include leukemia and non-Hodgkin’s lymphoma. Some scientists suggest that Roundup exposure may even cause birth defects.

Have you or a loved one been diagnosed with cancer after routine exposure to Monsanto’s Roundup weed killer? Contact us to discuss your potential case.

Who is most at risk of exposure to Roundup?

Roundup herbicide, made by Monsanto Company, is used in a variety of settings, from home gardens and family farms to commercial agriculture and industrial farmland. It is commonly used on commercial food crops such as corn and soybeans. These crops are often genetically modified to survive the deadly effects of frequent dousing with large amounts of Roundup herbicide. According to the EPA, glyphosate is America’s most used pesticide ingredient. The agency reports that United States farmers used about 290 million pounds of glyphosate in 2012. That is nearly double the amount used just seven years earlier.

Roundup herbicide exposure may happen in a range of residential and commercial environments. People at high risk of exposure often work in landscaping and the agricultural industry. Workers who are most at risk of exposure are:

Monsanto Roundup and the legal system

Over 42,700 lawsuits alleging that glyphosate in Monsanto’s Roundup herbicide causes cancer are filed around the country. Plaintiffs in those cases allege that they were never warned about the potential risks associated with the weed killer. Plaintiffs claim that Monsanto knew of the serious health risks for years but hid the information, rather than provide adequate warnings.

In August 2018, a San Francisco jury unanimously agreed that Roundup weed killer caused a 46-year-old school groundskeeper’s lymphoma. The plaintiff was responsible for mixing the herbicide and spaying the school district’s properties. The weed killer occasionally blew back on him and in one stance, doused the groundskeeper. He was later diagnosed with lymphoma. DeWayne Lee Johnson is the first person to take a case to trial against Monsanto alleging Roundup causes cancer.

In March 2019, a federal jury unanimously found that Roundup was a substantial factor in causing a 70-year-old Sonoma County man’s non-Hodgkin’s lymphoma. The plaintiff, a self-proclaimed do-it-yourselfer, applied the herbicide for decades on his 56-acre property. He bought the Roundup concentrate and pump-up sprayer from his local hardware store. Edwin Hardeman’s case against Monsanto is the first to be tried in federal court.

For years, concerned environmental scientists and consumer groups have been advocating for tighter restrictions and a ban on glyphosate use. If you or someone you know has been exposed to Monsanto’s Roundup and developed leukemia or lymphoma, the lawyers at Waters Kraus & Paul would like to hear from you.

How Waters Kraus & Paul can help victims of glyphosate exposure

Using our extensive resources, our lawyers have helped victims of toxic exposures in the workplace for over 20 years. With a national presence and a wealth of experience prosecuting pesticide exposure cases, Waters Kraus & Paul provides aggressive representation throughout the entire course of litigation. To learn more about legal representation at Waters Kraus & Paul, or to have one of our attorneys review your potential glyphosate exposure case, email us or call 800.226.9800.

People at Risk of Exposure:

March 31, 2021 Women’s History Month had its origins as a national celebration with a 1987 presidential proclamation. The law passed by Congress marked the month of March with observances to honor the achievements of American women in a variety of fields, including the law. To celebrate Women’s History Month this year, we’ve asked attorneys at Waters Kraus & Paul to participate in a roundtable discussion on their experiences in the field of law. Our participants included attorneys Leila Mustafa, Kay Gunderson Reeves, Elizabeth Post, Susan Ulrich, and Waters Kraus & Paul partners Leslie MacLean and Caitlyn Silhan. Celebrating Women in Law this… 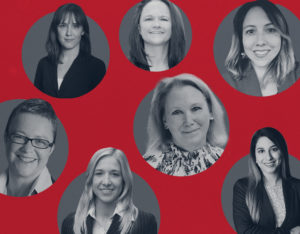 See other Attorneys in our Monsanto Roundup Practice