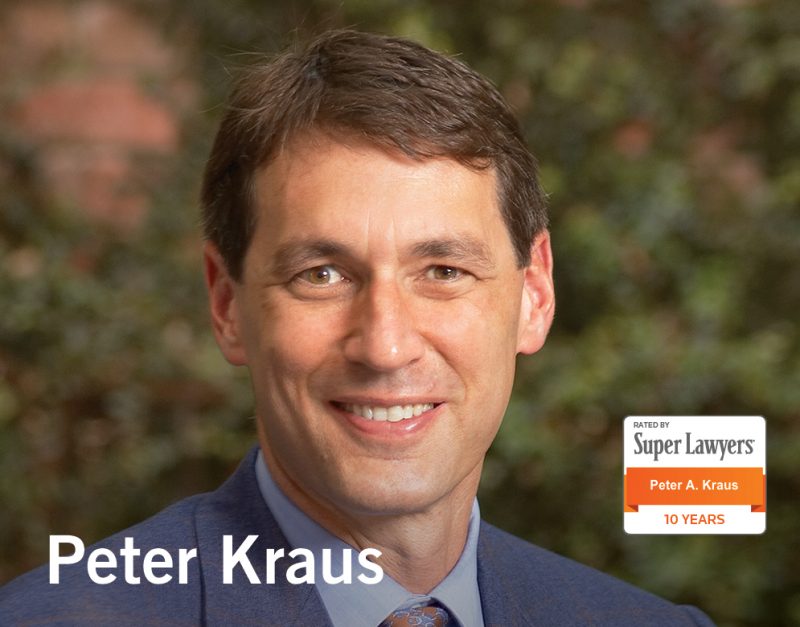 Peter Kraus, founding and managing partner of Waters & Kraus, LLP, has been named for inclusion on the 2017 Texas “Super Lawyers” list featured in Texas Monthly Magazine. This honor recognizes Mr. Kraus as being within the top five percent of lawyers in Texas for his practice area.

The “Super Lawyers” list began in 1991 to assist attorneys and consumers with searching for the best legal representation available. Super Lawyers® is a publication of Thompson Reuters, and is published annually as a special section in leading city and regional magazines across the country.

Lawyers are chosen to be on the Texas “Super Lawyers” list by a selection process that involves peer nominations, evaluations, and independent research. Over 55,000 attorneys who have been practicing for at least five years are surveyed across Texas. More than 70 different legal practice areas are represented by lawyers recognized by Super Lawyers®. Peter Kraus will appear on the 2017 Texas “Super Lawyers” list in the edition being published on September 5th.

Peter Kraus, a native of Dallas, Texas, is a founding and managing partner of Waters & Kraus. Mr. Kraus received his bachelor’s degree from Duke University and law degree from the University of Texas. He began his legal career as a commercial litigator, but has since switched focus to False Claims Act whistleblower cases, pharmaceutical injury litigation, and toxic torts.

Mr. Kraus has extensive trial experience with asbestos, benzene exposure, and pharmaceutical cases. He has earned several multimillion-dollar verdicts for his clients, and is an ardent supporter of consumer and victims’ rights. Mr. Kraus is involved in steering committees for Texas and U.S. asbestos multidistrict litigation, and has served on the ABA Commission on Asbestos Litigation.

Mr. Kraus is licensed to practice law in Texas, California, Missouri, and Virginia. He has been recognized on the D Magazine “Best Lawyers in Dallas” list and the Thomson Reuters Texas Super Lawyers® list repeatedly in the last fifteen years. He was also appointed to the Federal Judicial Center Foundation Board in 2014. Mr. Kraus was given the American Association for Justice “David S. Shrager President’s Award” in 2012, and the American Association for Justice “Heavy Lifting” Award in 2010 and 2011.

Besides his numerous awards and accomplishments, Mr. Kraus is also very active in the community. He is the former chairman of the boards of the St. Paul Medical Foundation and the Greenhill School. He is also a current member of the Southwestern Medical Foundation.

Waters & Kraus is a mid-sized plaintiffs’ firm experienced in a variety of practice areas, including asbestos litigation, benzene, medical device injuries, birth defects linked to toxic exposures, and qui tam whistleblowers. The attorneys at Waters & Kraus is fighting to hold corporations responsible for their negligent actions, and are prepared to take each and every case to trial to ensure justice for their clients. Email us or call at 800.226.9880 to discuss your potential lawsuit.