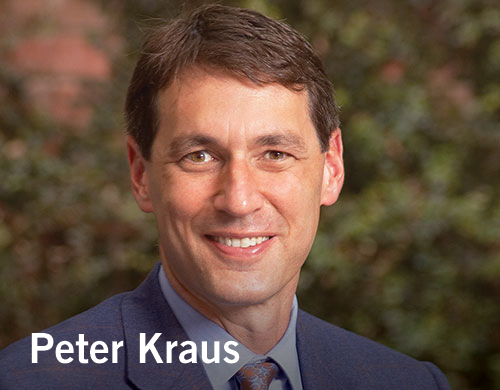 Peter Kraus, a founding partner of Waters Kraus & Paul, has a special connection to UT Southwestern University Hospital-St. Paul. As son of the late William Kraus, M.D., he has had ties to the hospital that began at birth.

Mr. Kraus’ father was a Harvard-trained cardiologist whose illustrious career began in the 1950s at St. Paul Hospital. A brilliant physician, he was known for being soft-spoken, compassionate, and innovative. Dr. Kraus’ innovation put him at the leading edge of technology – at one point, converting a linen supply closet into one of the first cardiac catheterization labs in Dallas. Dr. Kraus went on to build St. Paul’s heart program into one of the nation’s top centers for excellence in cardiovascular care.

Peter Kraus watched the institution’s rise firsthand – not simply as the son of a renowned physician, but also as someone who served the hospital in many roles. Mr. Kraus has been a volunteer, summer orderly, benefactor, and served as chairman of the St. Paul Medical Foundation.

Mr. Kraus has shown passion for making a difference in the lives of patients – passion that his father instilled in him. “As a physician’s son and through my work as an attorney, especially with families living with the devastation of mesothelioma, I know that making a positive impact in life is all about taking notice, getting involved, and seeing things through. . . . I know my father would be pleased.”

Mr. Kraus was elected to the board of the St. Paul Medical Foundation in 2003, and served as chairman in 2006. During his term as chairman, he spearheaded the foundation’s efforts to successfully raise over two million dollars for the hospital’s Heart-Lung Program. He also helped create the Mesothelioma Treatment and Research Program at UT Southwestern with a grant of $250,000 – a gift of Waters Kraus & Paul. The firm is also a longtime supporter of Transplant Tee, an annual golf tournament that benefits lung and heart transplant recipients at University Hospital-St. Paul.

Kraus is proud to continue the legacy of his late father by following in his footsteps. “UT Southwestern-St. Paul has played a central role in my life since before I can remember. And Dad was an incredible role model. It’s just natural to continue his legacy of servant-leadership to continue the good work that is done every day at this institution,” Kraus explained.

About Peter A. Kraus

Peter Kraus is a founding and managing partner of Waters Kraus & Paul. He is a native of Dallas, Texas, and earned his bachelor’s degree from Duke University and his law degree from the University of Texas. His practice focuses on toxic torts, False Claims Act whistleblower cases, and pharmaceutical injury litigation.

Kraus is a zealous supporter of consumer and victims’ rights. He is involved in steering committees for both U.S. and Texas asbestos multidistrict litigation, and has served on the ABA Commission on Asbestos litigation. In December, 2014, he was appointed by then Senate Majority Leader Harry Reid to serve on the board of the Federal Judicial Center Foundation. Licensed to practice law in Texas, California, Missouri, and Virginia, Kraus has been elected for membership in the American Board of Trial Advocates. He has been recognized on the D Magazine “Best Lawyers in Dallas” list and the Thomson Reuters Texas Super Lawyers® list repeatedly over the last fifteen years.

Kraus is active in the community, particularly in the areas of education, medicine, and the legal profession. He is the former chairman of the boards of the Greenhill School and the St. Paul Medical Foundation, and is a current board member of the Southwestern Medical Foundation. He also continues to serve on the board and executive committee at Greenhill, the Board of Governors of the American Association for Justice, and the board of the Texas Trial Lawyers Association.

The St. Paul Medical Foundation, with roots stretching back to 1964, works to promote excellence in medicine through philanthropy at UT Southwestern University Hospital – St. Paul, while simultaneously striving to provide the highest-quality treatment and care to underserved patients who desperately need it.

Waters Kraus & Paul is a national plaintiffs’ firm that tries cases on behalf of individuals across the country. The firm represents families in personal injury and wrongful death cases involving asbestos and benzene exposures, pharmaceuticals and medical devices, and birth defects as well as other childhood injuries caused by toxic chemical exposure and semiconductor chip manufacturing. The firm also represents whistleblowers in False Claims Act lawsuits who uncover fraud against the government. Based in Dallas, Texas, with offices in California and by appointment in Illinois, Waters Kraus & Paul has represented families from all fifty states and many foreign countries, as well as foreign governments. Contact Waters Kraus & Paul at 800.226.9880 to learn more about Mr. Kraus and how the firm can help you or your loved ones.