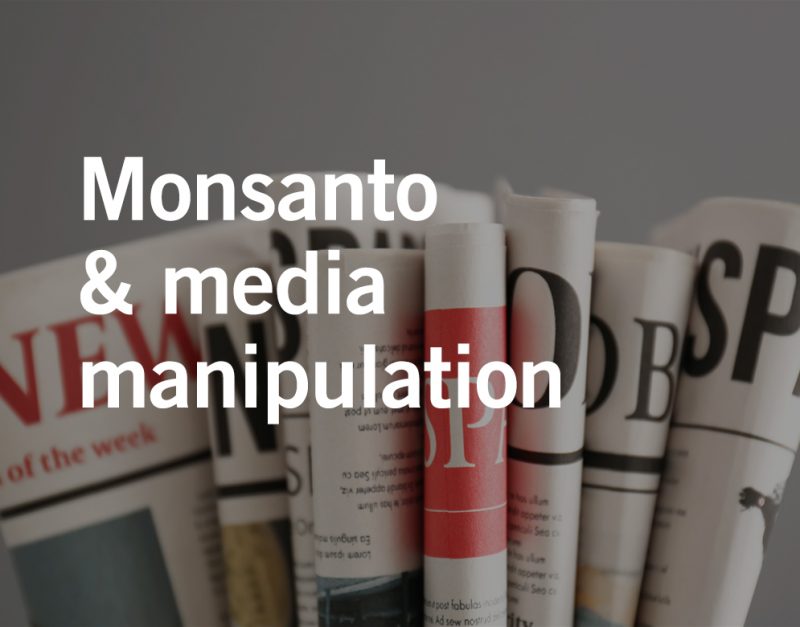 Between growing concern over the safety of glyphosate and allegations of media manipulation, who should the public trust when it comes to understanding the dangers of using Roundup herbicide? As confidential documents were uncovered during discovery in Monsanto Roundup lawsuits, the herbicide maker and its parent company, Bayer, were accused of manipulating the media to portray their corporation in a more favorable light. The deception by Monsanto about Roundup herbicide is worrisome, because while they promote stories that highlight the benefits and safety of the product, one of Monsanto’s own scientists said he would be concerned if someone wanted to test Roundup herbicide.

Bayer is facing over 13,000 Monsanto Roundup lawsuits filed by cancer victims, alleging the weed killer caused their illness. The main ingredient in Roundup herbicide is glyphosate, which has been linked to non-Hodgkin’s lymphoma.

While Monsanto Roundup lawsuits have the company in the spotlight, internal documents were released suggesting manipulation not only of scientists and regulators but also the media. One woman falsely identified herself as a freelance reporter for BBC while attending one of the Monsanto Roundup cancer trials in San Francisco. The woman spent time with other journalists who were there to cover the proceedings, feeding them storylines that favored the agrochemical giant. The woman was actually a “reputation management” consultant for FTI Consulting, who represents Monsanto. An attorney for some of the plaintiffs suing Monsanto refers to the company’s plan to persuade public opinion as their “dark money project.” He suggests this involves planting helpful news stories in popular news outlets, discrediting journalists who speak against Monsanto, and secretly funding front groups to bolster Monsanto support on social media platforms.

Examples of willful deception continue to crop up after Bayer “watch lists” surfaced. The lists consisted of pro or anti-pesticide figures, including journalists, politicians, and certain interest groups. Bayer admitted that their PR agency, FleishmanHillard, compiled the list of stakeholders and figures on behalf of Monsanto. While the company waits to investigate and gather more information, Bayer claimed they plan to suspend the agency’s PR work but continue marketing projects.

Seek justice with the help of our experienced attorneys. Our Dallas, Texas pesticide law firm has battled corporate giants on behalf of individuals like you for 20 years, aggressively fighting to hold companies responsible for dangerous chemicals and the cancers and personal injuries they cause. If you have suffered catastrophic injury caused by Monsanto’s Roundup or other harmful chemicals, we can help.