Marketing Efforts Created the Crisis that led to Opioid Lawsuits 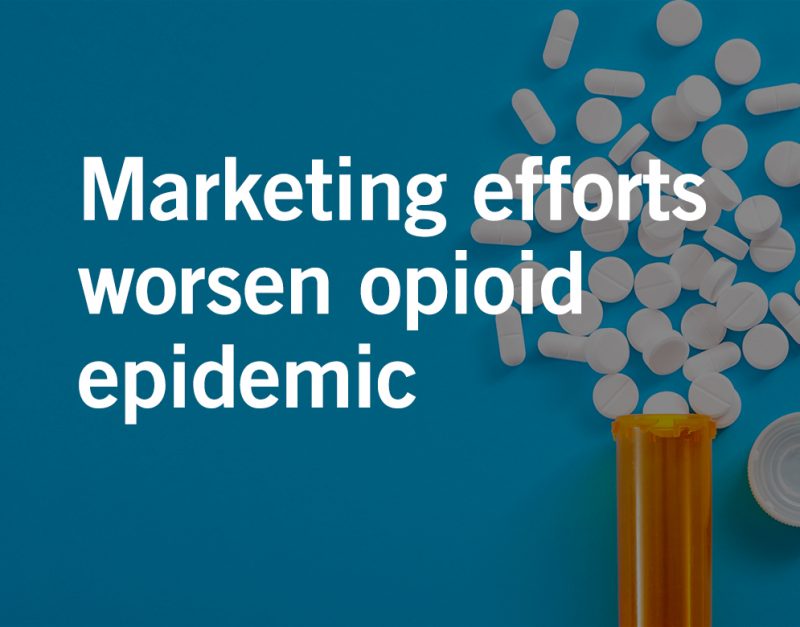 As courtrooms continue to fill with opioid lawsuits across the U.S., researchers provide more insight into the role that pharmaceutical companies played. A recent study revealed a connection between the amount of money spent on opioid-related marketing and the number of overdose deaths in various counties across the U.S. The study showed that pharmaceutical marketing of opioids towards physicians was associated with higher prescription rates and higher amounts of overdose deaths in certain counties.

In a study published by the JAMA Network Open, researchers found that when pharmaceutical companies spent more money on opioid marketing in a particular county, there were higher prescription rates and higher amounts of overdose deaths in that same county. The most common type of opioid marketing to doctors was in the form of incentives such as dinners or meals with company representatives. Dr. Scott Hadland from Boston Medical Center explained that the amount of each marketing payment was not as important as the frequency of visits and company interactions with doctors. The study included suggestions for lawmakers, such as imposing limits on pharmaceutical marketing. But researchers also noted that this may not be an effective solution because meals can be relatively cheap. Opioids attorneys have cited such marketing as a way to increase prescription rates of the drugs.

The U.S. exceeds the rest of the developed world regarding opioid prescriptions. From 2013 to 2015, drugmakers spent almost $40 million in opioid marketing, targeting about 67,500 physicians. Researchers discovered that for every three additional payments made to physicians per 100,000 people in a county, the number of opioid overdose deaths went up 18 percent.

Opioid prescriptions are most commonly used for pain management. They are made either from an opium plant or synthesized in a lab. Commonly misspelled as “opiods,” these drugs relax the body, can disrupt the natural release of endorphins, and can be highly addictive even when used for a short amount of time. Opioid treatment was originally limited to traumatic injuries and terminal cancer. However, drug manufacturers decided to capitalize on patients with long-term, chronic pain without informing them of the drug’s highly addictive nature. Opioids have also commonly been prescribed to new mothers recovering from childbirth, putting them at risk of chronic opioid use. There are three major categories of opioid drugs: non-synthetic, synthetic, and semi-synthetic. Within the three broad categories, there are several different opioid prescriptions such as:

In pregnant women, opioids can cross the placenta and enter the fetal central nervous system, putting the fetus at risk for birth defects. Since these painkillers relax the body and alter the natural release of the body’s endorphins, they risk the health of the mother and baby. Opioid use either prior to pregnancy or while pregnant can cause various birth defects, including:

Although opioids can be very effective pain management medications, the impact of opioid exposure is not fully known and can have dangerous long-term effects. The opioid epidemic has impacted not only our health system, but also our legal system. State and local governments have brought thousands of opioid lawsuits as people fight to hold pharmaceutical companies and manufacturers accountable for the part they played in this crisis. This epidemic has put a strain on our courts and on our medical emergency workers and their ability to combat the effects of opioids and overdoses.

Contact us to seek justice with the help of our experienced opioid attorneys. We’ve battled corporate giants on behalf of individuals like you for 20 years. Our Dallas, Texas opioid law firm represents families dealing with opioid-related birth defects and municipalities struggling to meet the demands of their communities. If you have a child with birth defects caused by exposure to opioids during the first trimester of pregnancy, we can help.