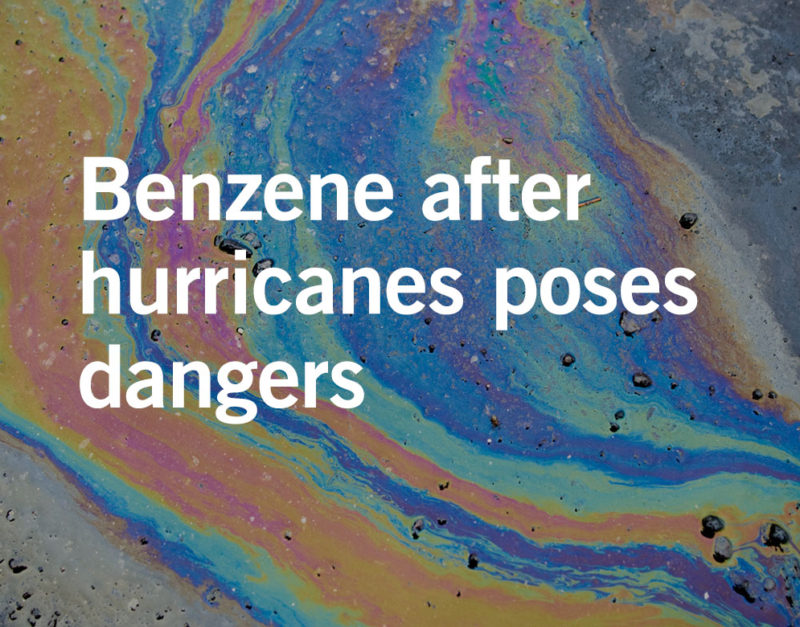 In the early morning of August 27th, 2020, Hurricane Laura made landfall near the Texas-Louisiana coastline as a deadly Category 4 hurricane. After being declared the tenth-strongest U.S. hurricane by wind speed on record, it comes as no surprise that Laura has inflicted an estimated $14 billion in insured damages and caused the death of 77 people. Though the worst of the storm has passed, there are now major public health and environmental concerns following the release of nearly 90 tons of toxic emissions from a sprawling chemical plant in Port Arthur, Texas.

Shutting Down Port Arthur Refinery Ahead of Laura

Before Hurricane Laura tore through the coastal region, Motiva Enterprises – a fully owned affiliate of Saudi Aramco – shut down its Port Arthur refinery in preparation for the storm. The precaution took place to keep workers safe, avoid spills, and prevent emissions from what is the largest petroleum refinery in the United States. Oddly enough, emissions of half a ton of cancer-causing benzene, as well as 8.7 tons of planet-warming nitrous oxide came from the shutdown itself. When petrochemical plants shut down, they often burn off excess fuel and chemicals that cannot linger in pipes safely during inactivity. Instead, facilities emit a significant amount of pollutants well above their allowed limit to get rid of waste.

The trouble is many air monitors that usually track pollution from nearby refineries are also shut down in anticipation of a storm. This means there is little real-time information about what nearby communities are breathing.

Exposed to Benzene?
Speak with our experienced attorneys.

How Much Benzene Pollution Have Texans Been Exposed to?

In the last few years, Texans have had their fair share of health scares brought on by enormous amounts of released toxins, including benzene and other hazardous chemicals. A 2019 report by the Environmental Protection Agency (EPA) inspector general found that state and local authorities failed to adequately monitor air quality during Hurricane Harvey, and neglected to communicate the potential risks with nearby residents. Unfortunately, the report stating a need for policy improvement also failed to make any direct impact on policy makers, as more than 25 air monitors in Texas remained offline a day following Hurricane Laura.

Just this year alone, high levels of benzene were found near six Texas refineries, three of which are in heavily populated Houston. “Benzene is the most ubiquitous hazardous air pollutant Houston has to deal with,” said Loran Hopkins, chief environmental science officer for the Houston Health Department. “It’s a carcinogen. It’s also a precursor to ozone formation and so understanding where we can go in and work on reducing benzene emissions is real vital information.”

With many people in the city of Port Arthur already suffering from preexisting health conditions like hypertension, asthma, and bronchitis, concern arises from the extra pollution on top of the current global pandemic. “In our particular area we are very concerned about these toxic fumes from refineries and about COVID.” said Hilton Kelley, the director of an environmental group in Port Arthur, Texas.

Benzene is a colorless, sweet-smelling chemical naturally found in crude oil. It is among the twenty most used chemicals in American industrial applications. Since the 1920s, medical experts have publicized the link between benzene and blood disease. By the 1930s, workers exposed to benzene in the printing industry were known to be at risk for blood cancers, two in particular – Acute Myeloid Leukemia (AML) and Myelodysplastic Syndrome (MDS).

Benzene is toxic to the human body when inhaled, or if it is absorbed through the skin. As it enters the bloodstream, it may cause drowsiness, headaches, unconsciousness, or even death.

When regularly exposed to benzene-containing fuels, solvents, and other products, workers, and other individuals are at a greater risk of developing benzene-related illnesses. Even though benzene exposure is typically known most as an occupational hazard, it is increasingly becoming a much more common hazard in cities that are home to major oil refineries and petrochemical plants.

Seek justice with the help of our experienced benzene attorneys. Our Dallas, Texas benzene law firm has battled corporate giants on behalf of individuals like you for 20 years, aggressively fighting to hold them responsible for dangerous chemicals and the personal injuries and cancers they cause. If you have suffered catastrophic injury caused by dangerous products, we can help.