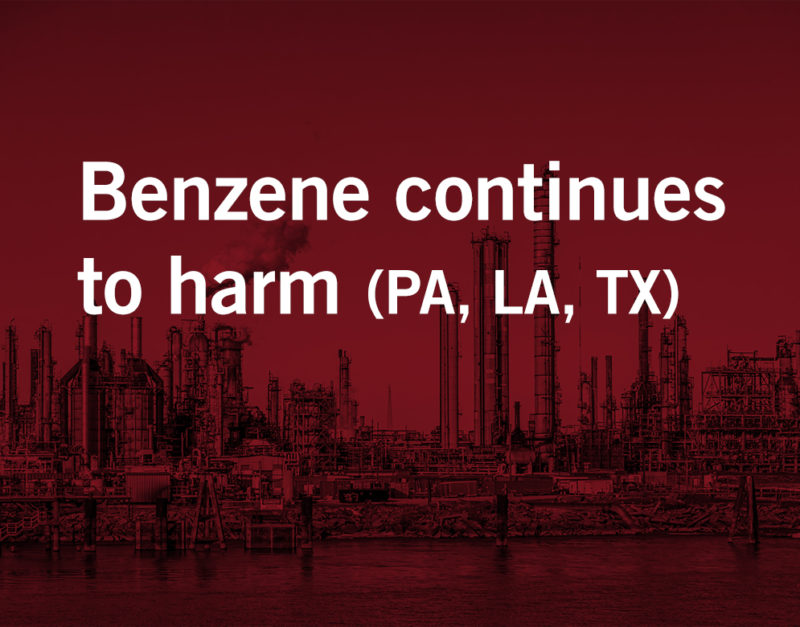 Throughout the country, industrial giants are releasing high levels of benzene into the air. Benzene, a known carcinogen, is a byproduct of oil and gas production. Its release poses a threat to workers and communities surrounding industrial production sites. Many of these sites are built near marginalized and minority neighborhoods. The greater the number of refineries, the greater the amount of benzene emissions and the greater the number of people at risk of developing diseases such as leukemia. Recent headlines bear witness to the problem.

In 2019, an explosive fire broke out at Philadelphia Energy Solutions (PES), the East Coast’s largest oil refinery. It happens to sit across the freeway from a vibrant African-American neighborhood, near schools, parks, a strip mall, and many homes. According to NBC News, a monitor later recorded PES had emitted more than 21 times the federal limit of benzene. This was not just one instance. From the beginning of 2018 to late 2019, the refinery exceeded benzene emissions for 74 weeks out of an 86-week period. Members of the surrounding community were never informed that they might have been exposed to the cancerous gas or that PES had one of the highest benzene levels in the country.

Long term exposure to benzene can cause leukemia, lymphoma, and a variety of immune system disorders. A hazard summary from the Environmental Protection Agency (EPA) warned that anyone exposed to 0.45 micrograms per cubic meter of benzene in the course of their lifetime would have greater than 1 in a million chances to develop cancer from continuously breathing it. However, in the communities surrounding PES, it is estimated that the risk of developing cancer from lifetime benzene exposure was more than 100 times the typical risk of 0.45 micrograms per cubic meter. Philadelphia is not the only city with communities suffering from excessive levels of benzene.

Exposed to Benzene?
Speak with our experienced attorneys.

Louisiana’s “Cancer Alley’ Is Getting Even More Toxic

“Cancer Alley” runs along the banks of the Mississippi, where companies like Exxon Mobil, Koch, and Shell release toxic air emissions from their facilities into Louisiana neighborhoods. Some 150 petrochemical facilities, and growing, call this area home. Rolling Stone reports that with increasing concentration these toxic facilities are built in areas with “the highest percentage of black and poor residents.” The large amounts of toxic emissions released are linked to cancer, cardiovascular and respiratory disease, and reproductive and developmental disorders. Much of the region has the highest cancer risk in the nation, according to the EPA. Spurred by the fracking boom, the government has continued to allow expansion, thus increasing the risk of health problems. The resulting pollution often goes unnoticed until disaster strikes, and air quality monitoring is stepped up.

Illegal Air Pollution in Texas More than Doubles in 2018

Hurricanes, flooding, and explosions rocked Texas chemical companies over the past few years. As a result, harmful chemicals were released, putting nearby residents on alert for toxic exposures. However, Luke Metzger of Environment Texas warns Texans should be concerned about activity at these plants year-round, not just during catastrophic events.

Environment Texas, an Austin-based environmental group, recently released their annual report ranking unauthorized emissions and the state’s top 10 polluters by chemical. According to their analysis, illegal pollution discharges more than doubled statewide since 2018. The group’s fourth annual report also calls out BASF Total’s complex in Port Arthur and Exxon Mobil in Beaumont, among others. The two companies are ranked 6th- and 10th-highest for unauthorized benzene events respectively.

Seek justice with the help of our experienced attorneys. Our Dallas, Texas, benzene law firm has battled corporate giants on behalf of individuals like you for 20 years, aggressively fighting to hold them responsible for dangerous chemicals and the personal injuries and cancers they cause. If you have suffered a catastrophic injury caused by dangerous products, we can help.