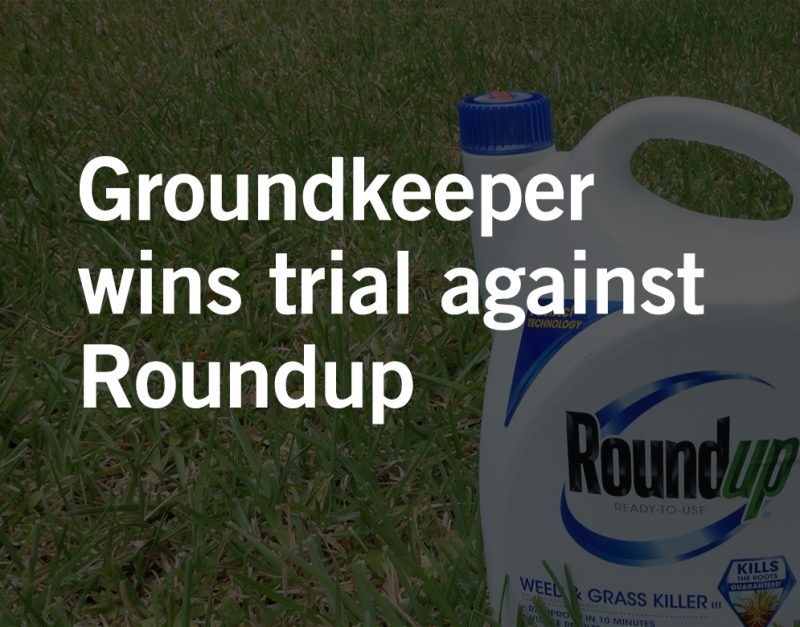 In a groundbreaking trial, a Northern California jury unanimously agrees Monsanto Roundup pesticide was a contributing cause of Bay Area school groundskeeper’s incurable cancer. The award was later reduced to $78 million.

Update: The judge later slashed the punitive damages portion of the award, reducing the total award to $78 million.

Mr. Johnson was exposed to Monsanto’s Roundup and Ranger Pro weed killers as a school groundskeeper in the San Francisco Bay Area. He routinely sprayed the school district’s properties with large quantities of the herbicides from a 50-gallon tank attached to a truck. During wind gusts, the weed killer would blowback, covering Mr. Johnson’s face. On one occasion, the hose broke completely dousing Mr. Johnson’s body with Roundup. Two years later, he was diagnosed with non-Hodgkin’s lymphoma.

According to court documents, lesions cover as much as 80% of Mr. Johnson’s body. On his bad days, Mr. Johnson is too weak to even speak. His doctors were not sure he would live long enough to see his day in court. So far, Mr. Johnson has beaten the odds, but his prognosis is bleak.

The International Agency for Research on Cancer, an arm of the World Health Organization, has classified Roundup’s main active ingredient, glyphosate, as a “probable human carcinogen.” The State of California has also added glyphosate to its list of chemicals known to cause cancer. However, a judge temporarily stopped the state from requiring that Monsanto add a cancer warning label on its products sold in California.

Roundup is the most popular herbicide used in the world. It is commonly sprayed on residential properties and used by commercial growers on agriculture crops and fields. According to the California Department of Pesticide Regulation, Roundup is the state’s most widely used herbicide. People who work in commercial agriculture or industrial farming are at high risk for exposure to pesticides and herbicides like Roundup.

Mr. Johnson, who is 46-years-old and married with two sons, is the first to take a case to trial against Monsanto alleging that Roundup causes cancer.

After deliberating for three days, the jury unanimously agreed that Roundup contributed to Mr. Johnson’s lymphoma. On August 10, 2018, in a precedent-setting verdict, the jury awarded Mr. Johnson $289 million. This amount includes $39 million for compensatory damages and $250 million for punitive damages. The jury found that Monsanto hid the risks from consumers. The jury also said that Monsanto should have provided a label warning of the potential health hazard.

Update: Monsanto fought back, asking the judge to overrule the whole jury award for punitive damages. Instead, Judge Suzanne Bolanos substantially reduced the punitive damages award from $250 million down to $39 million. Judge Bolanos said she would not order a new trial if Mr. Johnson accepts the reduction.

On October 26, 2018, Mr. Johnson agreed to the judge’s terms. Through his attorney, he informed the court that he accepts the reduction in punitive damages in order “to avoid the further burden of a new trial or appeal.” Mr. Johnson’s total award is now $78 million.

Monsanto has denied links between its pesticides and cancer for decades and maintains its product is safe. Before the reduced award was granted, the agribusiness giant said it planned to appeal. Monsanto faces many more lawsuits from potentially thousands of people who have been harmed by Roundup.

Waters Kraus & Paul
Waters Kraus & Paul is a mid-sized plaintiffs’ law firm that fights for families who have been harmed by toxic chemical exposures. We represent parents who have worked in the commercial agriculture and growing industry and who are raising a special needs child. If you have a child with birth defects and you have been exposed to pesticides or other chemicals while on the job, email or call 866.295.4518 to see how we can help you.