The Great Smog of London – Dealing with Human-Made Pollution 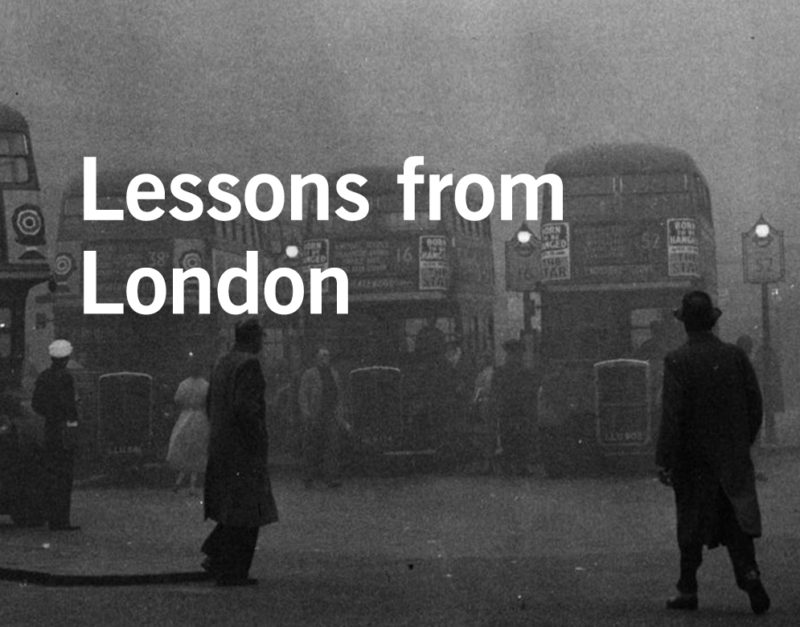 According to the World Health Organization (WHO), an estimated 7 million people die every year worldwide due to air pollution. It is a regrettable fact that the majority of the global population does not breathe in air that meets the scientific standard of “clean.” What is even more unfortunate is that the hopeful prospect of government-led clean air reform continues to be so short of reality.

Sixty-five years after the toxic Great Smog of London that threatened British lives, the air above the United Kingdom still hasn’t cleared as well as it should. December 5th, 1952, is just one of many days that remind us of the consequence of human failure to recognize the dangers of sulfurous coal-burning and human-made pollution.

Think you have a case?
Speak with our experienced attorneys.

The Fog that Killed Thousands

The Great Smog, which blanketed the British capital for nearly five days in December of 1952, was initially estimated to have killed 4,000 people. However, experts concluded that the Smog caused 12,000 deaths and hospitalized 15,000 other people. For a long time, the killer fog remained an unresolved mystery and, to some, a tragic anomaly. It took many years for scientists to understand what causes such disasters to occur.

On the morning of December 5th, 1952, a strong cold front descended upon London and gave way for a “pea souper” – or fog that turns into a thick and yellowish drape as it mixes with thousands of tons of soot pumped into the air. Though factory smokestacks and car emissions are primarily to blame, it did not help that a period of unusually cold weather preceding the Great Smog led Londoners to burn more coal than usual to keep themselves warm.

The Smog lasted until December 9th, then dispersed quickly when the weather changed. But not quick enough to spare the lives of thousands. Though London has suffered from poor air quality since the 13th century, the Great Smog is believed to be the worst air pollution event in the United Kingdom’s history. It caused significant disruptions by reducing visibility, hindering all transportation, and even penetrating indoor areas, where it proved lethal for the city’s most vulnerable populations: the elderly, young children, and those with respiratory problems.

The aftermath of the Great Smog saw a wave of unprecedented concern from the British government, and in some ways, readiness to finally take serious action. In 1956, parliament passed the Clean Air Act, which banned the use of coal for domestic fires in many urban areas. This Clean Air Act effectively gave local councils the power to set up smoke-free zones. Of course, like many unresolved issues in the world, solutions take time. Full and efficient implementation of the Act took several years, during which time London continued to experience deadly smog.

After many episodes of the same scenario, it becomes clear that government regulation and responsible corporate behavior are both extremely critical to safeguarding air quality. While many corporations may push for weaker clean air regulations to ensure cheaper operating costs for their businesses, it’s up to nations, states, and even smaller localities to ensure that citizens are protected from pollution dangers via effective policy. Though uncontrollable weather will always be a reality, the choice to act in the face of toxic substances emitted into the air is, without a doubt, changeable.

Seeking justice in court may be the only way to strengthen protection laws and hold companies responsible. No one should suffer from preventable injuries, and we passionately fight for families challenged by cancer and birth defects resulting from toxic exposure. The experienced attorneys at Waters Kraus & Paul are tirelessly standing up to corporations that put profits ahead of the safety of our clients and have done so for more than 20 years. Contact us now to find out how we can help you hold negligent corporations responsible for the injuries they have caused you.