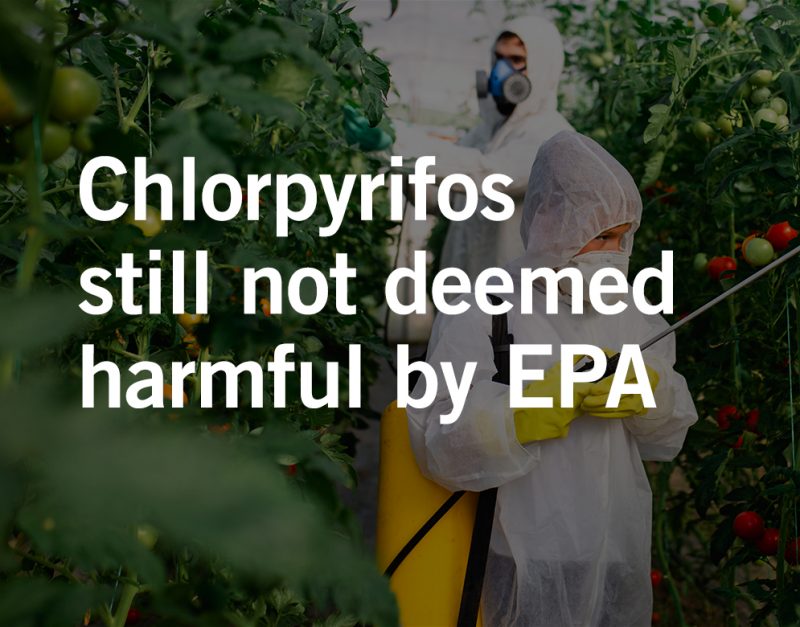 Despite scientific evidence, the Environmental Protection Agency (EPA) announced their decision to reject the ban on chlorpyrifos and to continue allowing the use of the pesticide. Since 2001, the use of chlorpyrifos has been a controversial issue and the center of a legal dispute. But as administrations and laws change, one fact remains the same: using chlorpyrifos is harmful to human health. Chlorpyrifos is one of the most commonly used pesticides for agricultural purposes, but it has been linked to dangerous health problems and birth defects. In a case against the EPA and agency administrator, Andrew Wheeler, various environmental groups along with seven states fight to ban chlorpyrifos completely.

The EPA recently issued an order denying the objections by environmental groups and rejecting the proposed ban on chlorpyrifos. The chemical has been linked to various fetal developmental issues and was banned from residential use, but is still used to treat fruits and vegetables. The EPA announced that the environmental groups provided data that was not sufficiently valid, complete, or reliable enough to support a ban on the chemical. The agency is required by law to periodically review chemicals and stated that the EPA will continue to monitor the pesticide and provide its next determination by 2022.

In April, the 9th Circuit Court of Appeals in San Francisco placed a court-ordered deadline on the EPA to address administrative objections regarding the ban on chlorpyrifos. Last year, three appellate judges ruled that the EPA unlawfully postponed efforts to ban the pesticide. However, at the request of the EPA, the 9th circuit agreed to rehear the case with the full panel present. The 90-day deadline was the result of that hearing earlier this year. The EPA had until mid-July to decide whether to ban the chemical.

The battle to ban chlorpyrifos started in 2001 when the EPA prohibited using the chemical for residential purposes. Then in 2015, the Obama administration moved to prohibit all types of chlorpyrifos use in the U.S. However, while Scott Pruitt was EPA administrator under Donald Trump, he reversed the order to ban the chemical. After environmental groups sued in response, the court ruled that the EPA violated the law and ordered the EPA to reissue the ban in August 2018. The Trump administration appealed this ruling.

Growers mainly use chlorpyrifos for commercial agricultural purposes to control the existence of pests. The chemical is used on over 50 crops in the U.S. such as grain, cotton, fruit, and vegetable crops. It is in a class of insecticides that inhibit nerve function. Chlorpyrifos is known by different names depending on who is using the chemical. It is known as Raid to homeowner, Dursban to exterminators, and Lorsban to fieldworkers. Exposure to chlorpyrifos can cause serious health issues in farmworkers and birth defects in the children of pregnant women. Birth defects due to pesticide exposure can include:

Seek justice with the help of our experienced attorneys. Our Dallas, Texas pesticide law firm has battled corporate giants on behalf of individuals like you for 20 years, aggressively fighting to hold them responsible for dangerous chemicals and the birth defects and personal injuries they cause. If you have a child with birth defects caused by dangerous products, we can help.