Donora: The Town that People Owe a Debt of Gratitude for Clean Air 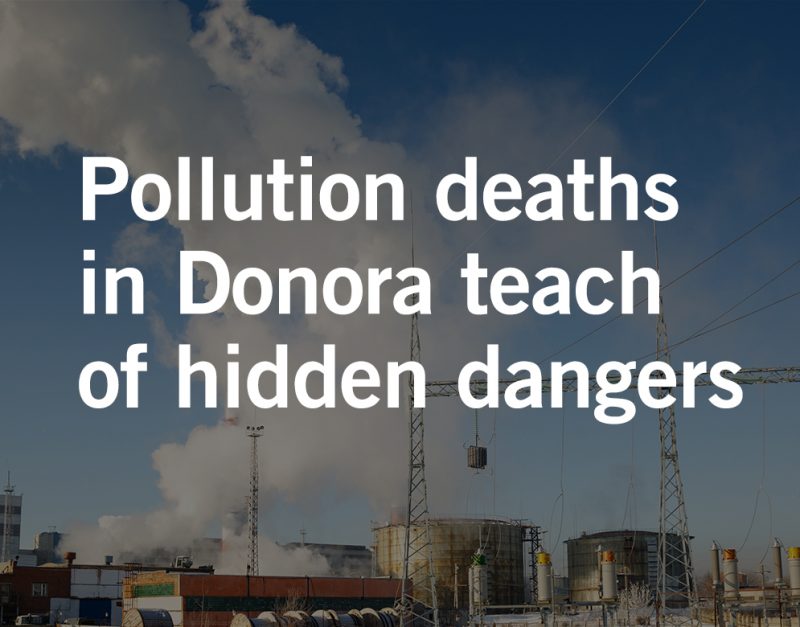 The wake-up call that made people realize that dirty air can kill began in the small town of Donora, Pennsylvania.

October 27 is the day of remembrance for the Great Smog of Donora, a public health and environmental disaster. That day in 1948 was the impetus for the clean air movement. Five days of smog left almost 20 people dead, and nearly 6,000 of the 14,000 Donora, Pennsylvania, residents sick.

According to Marcia Spink, associate director for air programs for the U.S. Environmental Protection Agency’s Region III office in Philadelphia, prior to Donora, “people thought of smog as a nuisance.” As it turned out, smog was and continues to be much more than just a nuisance; it can be a silent killer.

Despite the first death occurring on Friday and the city’s three funeral homes being filled to over capacity by Saturday, the culprit behind the overwhelming pollution, Donora Zinc Works continued to operate, spewing fumes into the air. On Sunday morning, the parent company, U.S. Steel, finally closed the zinc plant down.

In the aftermath, the U.S. Public Health Service issued a 173-page report, “Air Pollution in Donora, Pa.: Epidemiology of the Unusual Smog Episode of October 1948.” The report failed to place the blame for the smog on anyone, absolving the zinc plant. This only spurred the country’s determination for clean air on the way to the top. In 1950, President Harry Truman convened the first national air pollution conference, citing the incident in Donora as an example of the need.  In 1963, Congress passed the first Clean Air Act.

As we continue to fight against air pollution and its deadly effects, The Great Smog of Donora serves as a prime example of the need to have checks on corporations and industries. Asbestos, benzene, and pesticides are air pollutants that are produced and sold by corporations and industries that are still lacking the sort of controls necessary to keep people safe and healthy.

The mid-sized plaintiffs’ firm of Waters Kraus & Paul represents many people who have been injured by exposure to toxic substances while on the job. We are dedicated to fighting for stronger controls on corporations that utilize dangerous minerals and chemicals such as asbestos, pesticides, and benzene to stop them from endangering workers and the public. The experienced attorneys at Waters Kraus & Paul are tirelessly standing up to corporations that put profits ahead of the safety of our clients. Email us or call 800.226.9880 to find out how the attorneys of Waters Kraus & Paul can help you hold negligent corporations responsible for the injuries they have caused you.