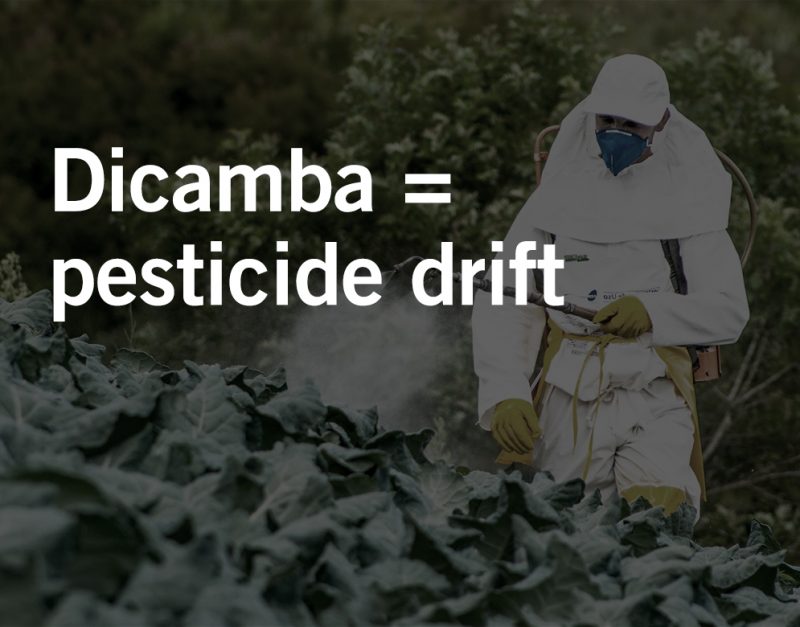 The state of Arkansas is working to ban the use of a weedkiller called dicamba.

Dicamba is sprayed on soybeans and cotton that have been genetically modified (GMO) to withstand its effects. At issue in Arkansas and other states is that dicamba sprayed on GMO fields is damaging adjacent farms. Those farmers who are not planting GMO seeds and do not use dicamba are blaming their dicamba-using neighbors for sickly crops of shriveled leaves and stunted plants.

Monsanto began using dicamba as a solution for killing weeds that have developed a resistance to glyphosate, better known as Roundup.

Although dicamba is not a new pesticide, its use has increased. Also, for the first time, it is being used during the summer months, which increases the chances of it turning into a vapor and floating or drifting beyond the directly sprayed areas. As of 2017, this is the first year that farmers have been able to legally spray dicamba on their soybean and cotton fields, and the problem is that farmers haven not been able to keep dicamba confined to their own fields. This is known as pesticide drift.

What is Pesticide Drift?

While pesticides sprayed directly over fields can cause farmers and plants to come in contact with dangerous chemicals, there are also hidden ways for workers and plants to be exposed. Pesticide drift occurs when pesticides are sprayed from the air over one field and are then carried by wind to another field. Farmworkers and crops in the nearby field, unaware that they are being exposed to this harmful pesticide, are defenseless to protect themselves.

Monsanto claims that its unique dicamba, which is mixed with an additive to make it more stable, does not drift from the intended spraying region if farmers use it correctly.

Ty Vaughn, a Monsanto executive, and Scott Partridge, Monsanto’s vice president for global strategy, have stated that damage from dicamba results from farmers not understanding the rules or not following the label’s directions for proper use of the herbicide. In contrast, tests carried out at the University of Arkansas and other universities show that dicamba does indeed vaporize and spread across fields.

Gardeners, wildlife advocates, and beekeepers have also started reporting damage from dicamba. Richard Coy, who manages 13,000 honeybee hives across Arkansas, Missouri, and Mississippi, reports that in areas where farmers were spraying dicamba on their crops, honey production in his hives fell by 30 to 50 percent. This reduced honey production was directly attributed to less blooming vegetation, or less food for the bees.

Why is Pesticide Drift Important to Farmworkers?

Although dicamba has not been linked to bodily harm in farmworkers, the dicamba issue demonstrates the danger of sprayed pesticides unintentionally drifting to areas outside of the targeted, sprayed area.  There are other pesticides that have been linked to dangerous effects in farmworkers, but sheer economics continues to make it profitable for farm-owners to use these harmful pesticides. The birth defect attorneys at Waters Kraus & Paul are fighting to fix this problem. By holding farm-owners accountable in the courts, Waters Kraus & Paul is striving to show them that providing a safe work environment is more profitable than using pesticides which harm farmworkers. If you or your loved ones were exposed to pesticides and had a child with birth defects, you deserve justice. Successfull representation of families harmed by pesticides is how Waters Kraus & Paul strives to prevent other families from suffering the same harm.

If you have a child with birth defects and you worked on a farm, contact the birth defect attorneys at Waters Kraus & Paul at 800.226.9880. We have been representing families who have suffered as a result of toxic exposure for over twenty years. Contact us to learn how our birth defect lawyers can help you fight companies who refuse to discontinue the use of pesticides known to be harmful to children.