Cutting Countertops: Is it Synonymous with Silicosis? 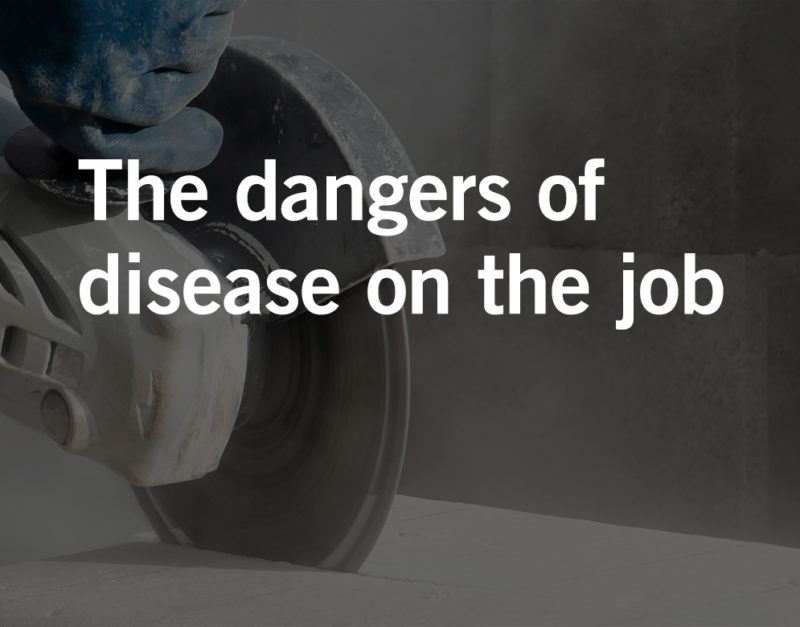 Despite the safety and health regulations that are seemingly assured to manual labor workers in the countertop fabrication industry, there is an obvious disconnect between company claims of protection, and the serious fatal diseases contracted by workers as a result of minimal action taken to verify those claims. This reality is especially true to individuals who have developed silicosis due to long-term exposure to hazardous material found in engineered stone.

Silicosis is a lung disease caused by breathing in physically damaging particles known as crystalline silicas. It is both the oldest and the most common occupational lung disease found in labor workers, especially those who cut engineered stone. The symptoms that are generally associated with silicosis include shortness of breath, chest pain, a persistent cough, as well physical weakness that increases with time. What makes the detection of silicosis so difficult is that the symptoms may go unnoticed for years, and this is due to the slow developing nature of the disease. What worsens the prospect of contracting silicosis is that it has no cure, rather limited treatment options, and few enacted preventative measures in the industries it is prevalent in.

In the American Countertop industry, manual labor workers are exposed to hazardous dust as a result of cutting engineered stone containing crystalline silica. With long-term exposure to the harmful mineral, silicosis is often the outcome. While the disease has been recognized by engineered stone companies to be a threat to the health and safety of workers, the industrial reforms needed to reduce risky exposure have been deficient and long overdue. This is made evident in a series of reports done by NPR on the issue.

In an article examining the risks U.S. countertop workers face in their profession, NPR highlights the health concerns linked to cutting engineered stone. Unlike natural granite or other raw stones that are extracted from mineral-rich deposits around the world, engineered stone is produced in factories. It is there where fragments of stone are bound together by an adhesive to produce large slabs for countertops. As those slabs are reshaped into certain measurements, they are cut and polished by people who are neither well protected from the silica in the dust released, nor warned against it. Ublester Rodriguez, the main subject of NPR’s thorough report, confirms this by describing his work experience at a countertop fabrication company in Houston, Texas.

Did you get silicosis after exposure to silica from engineered stone? Speak with our experienced lawyers.

As a victim of Silicosis, Rodriguez recounts his employer’s failure to warn him about the dangers of dry cutting stone for years. Unlike wet cutting, dry cutting does not involve the use of water on the blades to diminish exposure to dust. Only after years of Rodriguez being required to dry cut stone did the company Rodriguez worked for adopt wet cutting. However, the National Institute for Occupational Health and Safety (NIOSH) reports that even wet cutting results in an overexposure to breathable silica.

The risks of cutting engineered stone largely outweigh those of working with natural stone. According to researchers at the NIOSH, artificial stones used in countertops have been found to contain up to 90% more silica content than their natural counterparts. Despite this, the engineered stone industry in the U.S. has grown unabated  for years.

With over 100,000 workers at risk of developing silicosis from cutting materials like quartz every day, it is only natural to expect companies to promote safe cutting methods. Unfortunately, many U.S. countertop workers in four states, including Texas, have been diagnosed with silicosis according to a report by the CDC. This suggests that more needs to be done to improve the regulations of working with engineered stone in the American Countertop industry. Until that happens, individuals suffering from silicosis and its symptoms are not only deserving of the help to confront those responsible for their disease, but they are entitled to it.

How We Help Silicosis Victims

Seek justice with the help of our experienced attorneys. Our Dallas, Texas, silicosis law firm has battled corporate giants on behalf of individuals like you for 20 years, aggressively fighting those responsible for dangerous materials and the personal injury and lung diseases they caused. If you have suffered catastrophic injury or loss resulting from dangerous products, we can help.