The Current Toxic State of Microelectronics 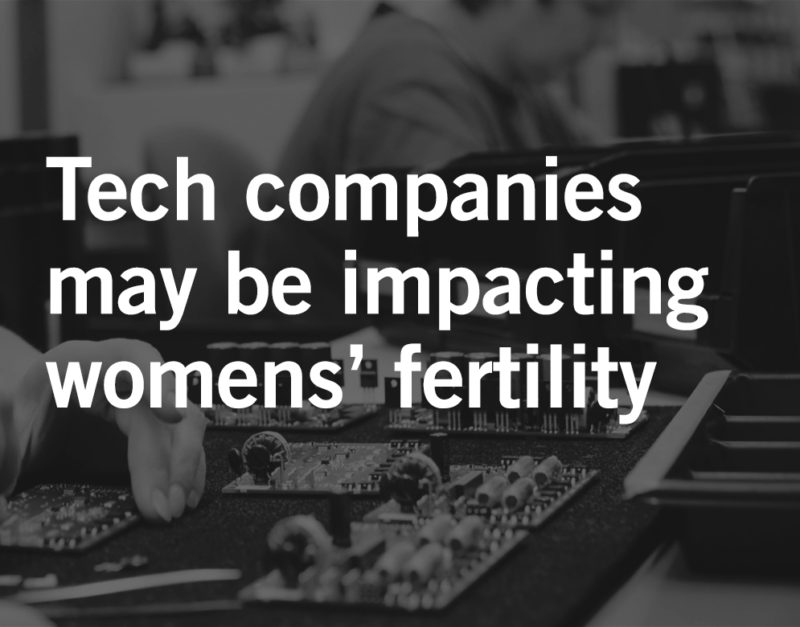 Twenty-eight years ago, when U.S. tech companies assured the public that they would stop using chemicals proven to cause miscarriages and birth defects, they did not ensure their Asian suppliers do the same. Today, thousands of women across Asia are still exposed to toxins in solvents or strippers called ethylene glycol ethers, or EGEs. The result: women can suffer miscarriages, infertility, and their unborn children can develop birth defects or childhood diseases. With the last administration’s talks with semiconductor companies to rebuild chip factories in the United States, there is a possibility that reproductive health effects due to toxic exposure may once again become an industry-wide concern.

Just as in the U.S., women dominate production jobs in South Korea’s chipmaking industry. More than 120,000 are employed and recruited straight out of high school, which indicates they are mostly of childbearing age. Since the mass production of computer chips started in South Korea, many women have faced the harsh effects of working around toxic EGE-containing solvents. Park Min-sook, for instance, worked for seven years at a Samsung semiconductor plant. She suffered from a miscarriage and struggled with infertility for years, and eventually even developed breast cancer – another consequence of working around toxic chemicals found in plants. “I had a friend in Bay 1 who was infertile for seven years. There was another girl in Bay 2 who was infertile for ten years. I myself struggled with infertility for four years…It struck me that it wasn’t just a coincidence.”

Was your child born with birth defects after exposure to toxic chemicals? Speak with our experienced lawyers.

In 2010, South Korean epidemiologist Kim Myoung-hee became increasingly curious regarding the reproductive-health status of these women. As such, she began compiling and analyzing occupational health-studies about semiconductor workers worldwide – a body of work that had drawn little attention in South Korea despite the industry’s significance there. By conducting a new reproductive-health study primarily looking at companies in Korea, Kim found significantly elevated miscarriage rates and a rate for those in their 30s almost as high as in U.S. factories. Her research also connected microelectronics production to fatal birth defects in the children of not only female workers but also men. When she published the study, Kim and her colleagues repeated the mantra of prior research – even though EGE’s were supposedly phased out by corporate giants, they could not be certain of it.

After the outcry in the U.S. in the 1990s, chemical companies said they’d changed the formulations for products they supplied to chipmakers, including those in Asia. But the testing obtained by Bloomberg Businessweek shows that changes were not made quickly, or in some cases at all.

Despite not being manufactured in the U.S. anymore, semiconductor chips and their ensuing health effects might have managed to migrate and persist here in birth defect lawsuits. Many individuals who have suffered or continue to suffer from reproductive-health issues due to the chemicals found in chip manufacturing are now facing multibillion-dollar corporations in court. More than two dozen technology and chemical companies have been sued in at least 66 separate civil actions nationwide. Some lawsuits were filed following claims that chemicals in chip fabrication areas caused cancer. Mostly, however, plaintiffs have included at least 136 children with childhood diseases or birth defects resulting from maternal toxic exposure in the workplace. Birth defects linked to exposure in high-tech industries include:

Companies like Samsung and SK Hynix have dominated global production of memory chips for two decades. In fact, they controlled 74% of the market in 2015 alone. Their chips are found in virtually everything, from iPhones to Android, laptops, cars, televisions, and game consoles – anything with an electronic brain. So, it does not come as a surprise that they are also among the most named chip-manufacturing companies involved in complaints of employees developing cancer, suffering from infertility, miscarriages, and birth defects of their children. But that is not where it ends. Even globally reputable companies like Google have admitted that workers are regularly exposed to birth defect chemicals.

These facts reveal that the promised reforms in the microelectronics industry back in the early 1990s do not appear as deep or as wide as expected. The fact that women and men worldwide are subjected to dangers that experts and corporate leaders alike have agreed should not be in workplaces is a tragedy. It is both a disappointment in companies that assured better standards and a serious loss for public health.

How We Help Victims of Toxic Chemical Exposure

Seek justice with the help of our experienced lawyers. Our Dallas, Texas, law firm has battled corporate giants on behalf of individuals like you for 20 years, aggressively fighting to hold them responsible for dangerous chemicals and the birth defects and personal injuries they cause. If you have a child with birth defects caused by dangerous products, we can help.