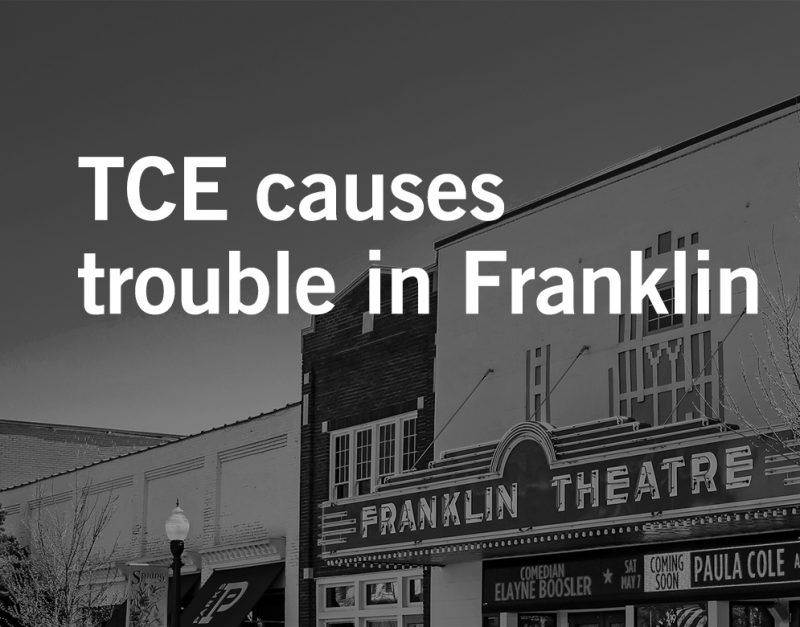 A conservative Indiana county goes against party lines to protect its children from cancer-causing toxic exposure.

An increasing number of rare childhood cancers linked to toxic exposure recently turned up in the town of Franklin, Indiana. A group representing parents in the area asked why the EPA has not stopped a cancer-causing toxic gas, trichloroethylene (TCE), from continuing to spread from an old industrial site ordered to be cleaned years ago by the federal government.

How Did Toxic Exposure to TCE Occur?

The EPA recently identified a carcinogenic plume of TCE spreading underground and releasing fumes into Franklin homes. The controversial chemical is a colorless fluid with a subtle, sweet odor used as a stain remover and a degreaser by thousands of facilities in the United States. The company running the Franklin industrial site also used TCE and reportedly dumped its toxic wastewater into a municipal sewer, according to the EPA.

In 1990, when the site was shut down, the EPA arranged to work with the Franklin Ind. property owner to clean up the site. The site’s owner, Amphenol, installed a “pump and treat” system to control the contamination, but it has failed to keep the residents safe.

Local parents recently organized a group, If It Were Your Child, and claim that the EPA mismanaged and delayed dealing with issues at the Franklin site, even after the EPA knew of the dangers. Parents are demanding the agency finish what it started.

The group also asked that the EPA restrict continued use of TCE and other chemicals to limit toxic exposure. Under the Trump Administration, the agency has put on hold or rolled back regulations on this and other chemicals. This set the solidly red county that voted overwhelmingly for President Trump against the environmental policies he strongly espoused.

Under the Obama Administration, the EPA declared TCE “carcinogenic to humans by all routes of exposure,” and reported that TCE causes developmental and reproductive damage, particularly cardiac birth defects. The administration marked TCE for additional review, with the potential of a complete ban.

This could have strengthened cleanup rules for sites across the country, yet the EPA under the Trump Administration put some TCE policy updates on hold. The updates included indefinitely postponing the ban on TCE’s most dangerous uses. The current EPA has also scaled back a wide-ranging review of TCE and other chemicals that could limit toxic exposure.

The Consequences of Toxic Exposure

The incidence of pediatric cancers in Johnson County, where Franklin is located, is 21.7 cases per 100,000 children, higher than the national average of less than 18 childhood cancers per 100,000 children.  After tracing the TCE contamination to a former factory, Edison Wetlands Association (an environmental group working with the parent’s organization) detected the chemical in the air outside of two homes close to the factory site. Additional tests found levels at more than 250 times the state limit around a sewer near the homes.

Tom Forsythe, an executive vice president at Kyzen, a Tennessee cleaning-materials company, told the EPA that there have been “greener alternatives to TCE for years.” Dry cleaners lobbied against increasing protections saying that greener substitutes could harm clothing. While representatives from the chemical industry claim that oversight ensures workers are not harmed, they don’t prevent the toxic exposure that has allegedly harmed the children of Franklin.

How Waters Kraus & Paul Can Help

The mid-sized plaintiffs’ firm of Waters Kraus & Paul represents many people who have been injured by exposure to toxic substances while on the job and in their homes. We are dedicated to fighting for stronger controls on corporations that utilize dangerous minerals and chemicals. Our toxic tort lawyers work to stop companies from endangering workers and the public. The experienced lawyers at Waters Kraus & Paul are tirelessly standing up to corporations that put profits ahead of the safety of families. Email us or call 800.226.9880 to find out how the attorneys of Waters Kraus & Paul can help you hold negligent corporations responsible for the injuries they have caused you.