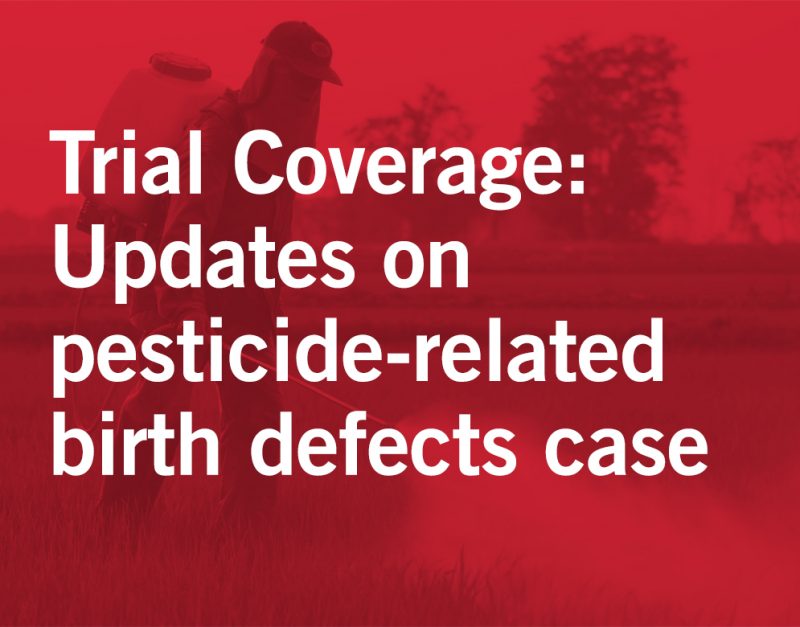 David Bricker and Susan M. Ulrich, birth defect attorneys for Waters Kraus & Paul, are nearing the end of a heated civil trial representing Erik Joe Morales, a 9-year-old born with hemifacial microsomia. The birth defects lawsuit alleges that Erik’s hemifacial microsomia was the result of his mother being exposed to pesticides during pregnancy while working on a strawberry farm.

The case is being covered in the local publication Ventura County Star. The following is a recap of the case, pulling direct quotes from the paper’s stories that highlight important aspects of the trial.

“The role of produce firm Well-Pict Berries took center stage . . . in a trial over whether a boy developed a birth defect because his mother was exposed to a hazardous level of pesticides while picking the company’s fruit.”

“Erik has been diagnosed with hemifacial microsomia, a condition in which the lower half of one side of the face is underdeveloped and does not develop normally. His legal counsel says he was born with a malformed head, jaw and ear; has undergone repeated surgeries; finds it difficult to talk and eat; and faces emotional, physical and learning difficulties.”

“The lawsuit alleges the fields were sprayed while harvesters were working and that the laborers were not given any protective equipment and were not warned of the hazards.”

“The child is suing four agricultural businesses: Well-Pict; Soilfume Inc., which operated the berry farm in 2007; labor contractor Ramco Enterprises; and T.T. Miyasaka Inc., which owns half of Soilfume.”

“The mother of a boy born with birth defects allegedly caused by pesticide exposure cried on the witness stand . . . as she described his struggle with a facial deformity. Strawberry harvester Eulalia Lopez-Gomez told jurors in a civil case that her son looks in the mirror every day and asks when he is going to be well. He has complained of being teased at school and covers his face to keep shoppers from eyeing him in stores, she said.”

“‘He doesn’t want anybody to look at him,’ she told jurors through a Spanish translator in the fourth week of the trial that opened in late April in Ventura. Once when the two were outside together, he told her he wanted a car to run over him because he didn’t want to live anymore, she said.”

“The boy, 9-year-old Erik Joe Morales, of Oxnard, has sued four agricultural firms over his disabilities. He has been diagnosed with hemifacial microsomia, a condition in which the lower half of one side of the face does not grow normally. He also receives special education for an intellectual disability.

A lawsuit filed on Erik’s behalf claims that the boy was harmed during a critical period of fetal development because his pregnant mother absorbed pesticides into her body while she was harvesting strawberries at Anacapa Berry Farms near Oxnard in 2007.”

“. . . [T]he plaintiff may be able to prove its case if Lopez-Gomez can persuade jurors that she was doused in pesticides while working at the farm. In her testimony . . . the Oxnard woman did not use the word ‘doused.’ But she said her skin and her clothes up to her waist would get wet, that her eyes and throat would burn and that she got headaches. The liquid on the ground would puddle and go through her sneakers and socks, she said. Lopez-Gomez said she did not dare complain to her foreman for fear of being fired.”

“‘They would spray right by where we would walk by or the place where we were supposed to pick,’ she said. She said the tractors would spray two or three times a week, both in the morning and the afternoon. She estimated the workers were about 20 feet from the spraying or closer. She said her whole crew would be sprayed. . . .”

“Lopez-Gomez testified that she received no safety training from Ramco before starting her job at Anacapa Berry Farms in 2007 nor from any grower she had worked for in the past 16 years. She did not quit her job after learning she was pregnant because no one told her pesticides could be harmful, she said.”

“Erik sat in the gallery with some of his attorneys as his mother testified. When Bricker asked what her biggest hope was for the boy, she extended her arm toward him and said she hoped he would feel accepted. ‘For him to feel like a normal child because to me he is normal,’ she said.”

How Can Waters Kraus & Paul Help Victims of Pesticide Exposure?